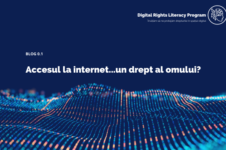 The COVID-19 pandemic has changed us irreversibly. We work increasingly more from home, staff meetings have moved from conference rooms to ZOOM, and we shop more online to avoid going physically to stores. Even a consultation with a doctor can now take place in a virtual medical room during a telemedicine appointment.

None of these changes would be possible but for one thing—the Internet, the tool that allows us to adapt in a world where we have to isolate ourselves. That the Internet is essential in 2021 is an undeniable truth. During the pandemic, we managed to leverage the possibilities offered by the Internet. It has become an important medium of communication and contact with other people. Using the Internet, we have changed how we socialize, find information about what happens every day worldwide and locally, or conceive the idea of a new business.

What do human rights treaties say?

The signatories of the Universal Declaration of Human Rights (UDHR)—the main document addressing human rights protection internationally—could not provide for the right of access to Internet for the simple reason that this invention would come to be piloted only 20 years later. The declaration was signed in 1948, whereas the Internet appeared by the end of 1968.[1]

In the absence of a “separate right,” access to Internet became integrated and interpreted as part of the fundamental right to freedom of expression. Freedom of expression is provided for in a series of international human rights treaties.[2] It includes, among other, freedom of opinion and freedom to receive or communicate information irrespective of national borders. 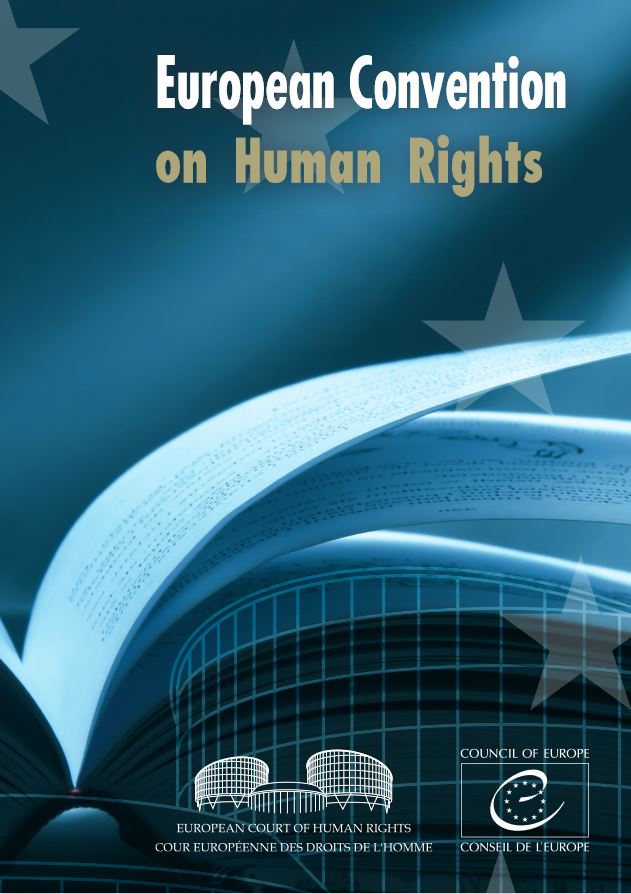 Given the lack of any frontiers on the Internet, it is rightfully the best facilitator of freedom of expression. Therefore, access to Internet can be viewed as a prerequisite for exercising freedom of expression, and any restriction of such access, a violation of this freedom.[3]

The European Court of Human Rights (ECtHR) partially addressed the issue of access to Internet as a separate right only in 2016 in Kalda v. Estonia. That case concerned a prisoner’s complaint about the refusal of the penitentiary’s administration to allow him access to certain websites that contained legal information. The plaintiff especially complained that the denial of access to these websites had violated his right to receive information through the Internet and precluded him from conducting legal research concerning the legal proceedings that involved him.

The ECtHR held that there was a violation of Article 10 (Freedom of Expression) of the Convention and found that the authorities’ refusal to grant the plaintiff access to the websites that contained legal information had violated his right to receive information. The Court noted in that case that the contracting states were NOT obliged to ensure access to Internet. That said, if a state decided to offer this access, it must give a thorough reasoning for the denial of access to certain websites to any users.

Can and will states regulate the Internet?

Internationally, in 2012, the United Nations’ Council unanimously adopted a resolution that provided for the promotion, protection, and observance of human rights on the Internet.[6] The resolution stated that any person should benefit of the protection of their rights equally and developed the principle “what applies offline, applies online.” At the European level, the Council of Europe (CoE) developed several guidelines concerning the regulation of the Internet. According to the Internet Governance Strategy,[7] the member states of the Council of Europe should ensure the following, among other things:

The phenomenon of Internet shutdowns or power Internet outages 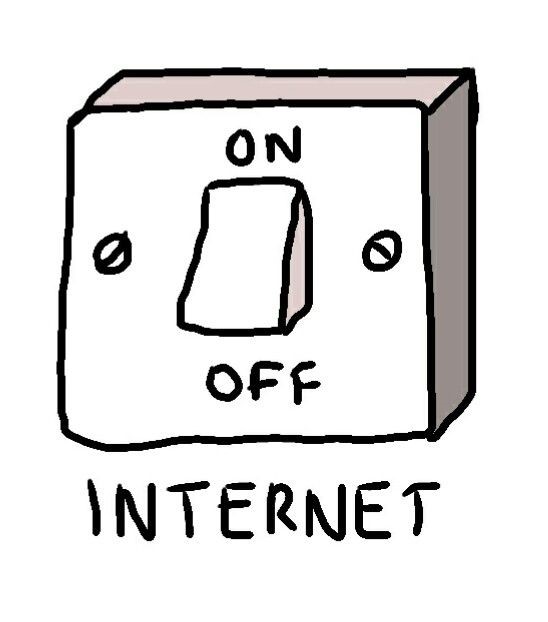 Although states committed themselves to ensuring access for all users, without assuming exclusive regulatory and/or supervisory powers over the Internet, there is a growing number of instances, especially in fragile democracies, where authorities attempt to restrict or even block access to Internet.

The Internet shutdowns phenomenon happens when certain entities—usually the government—deliberately weaken or cut off access to Internet and/or some mobile apps (for instance, WhatsApp, Facebook, or Telegram) to control the flow of information.[8]

According to the global coalition #KeepItOn, in 2019, there were at least 213 documented attempts to suspend or shut down the Internet in over 35 states. These states included India, Venezuela, Russia, and even the United Kingdom. In 2020, partial or total Internet shutdowns also occurred in Belarus in the wake of the presidential election.

In Moldova, the latest major incident of cutting off the mobile web occurred during the events of April 2009, when authorities cut off the cell phone coverage within the perimeter of Piața Marii Adunări Naționale (the central square of the city). Access was shut down because over 10,000 protesters rallied on Twitter (some via GPRS technology on their mobile phones) to share their opinions and spread the news about the political protests in Chișinău. Authorities went as far as to attempt shutting several websites for a few days.[9] 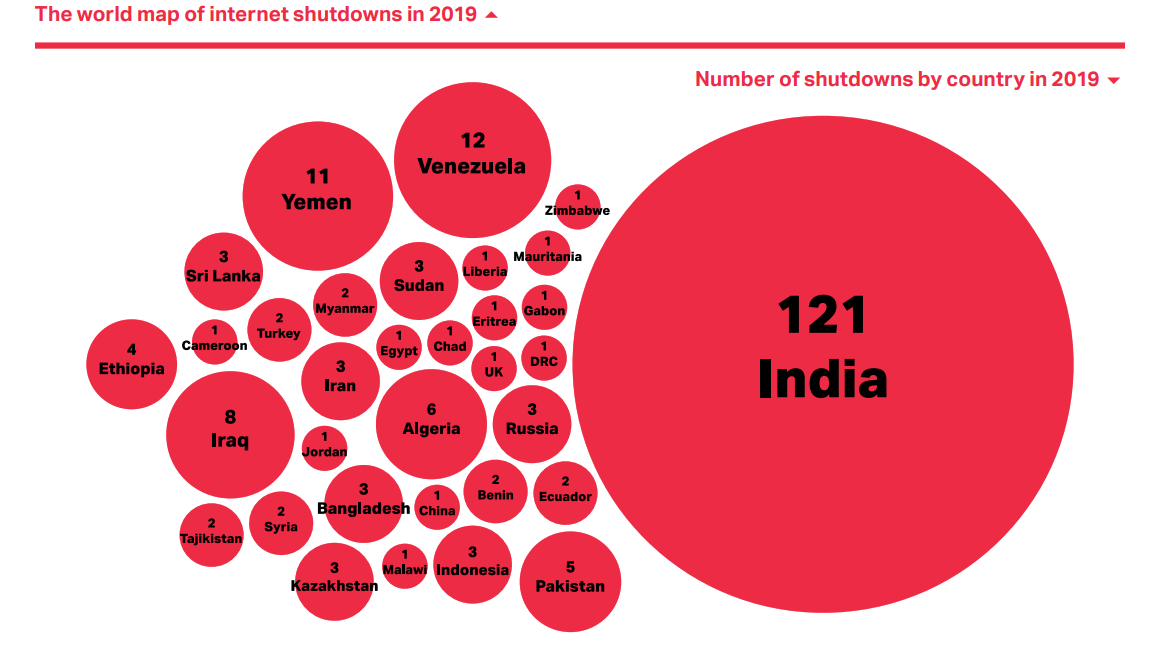 Source: KeepItOn report from 2019 on internet shutdowns available at: https://www.accessnow.org/cms/assets/uploads/2020/02/KeepItOn-2019-report-1.pdf 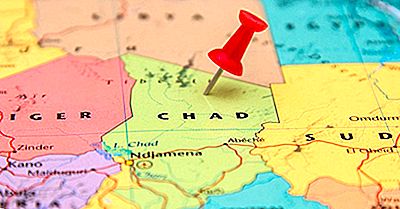 In 2018 and 2019, Chad shut down access to social platforms, including WhatsApp, Twitter, Facebook, Instagram, and YouTube for a period of 472 days. The government tried to justify the shutdown by reasons of national security. Still, the authorities blocked access right when President Idriss Deby of Chad declared his intention to remain in office until 2033. He had been president since 1990.

When authorities cut off the Internet, they usually try to justify themselves. According to the global coalition #KeepItOn, the most common official justification for blocking the Internet is the fight against fake news, hate speech, or the content that promotes violence. However, the actual reasons why states cut off or restrict access to the Internet are often related to protests, military actions, outbreaks of violence, political instability, religious holidays, or elections.

The “official” justifications versus actual causes of Internet shutdowns 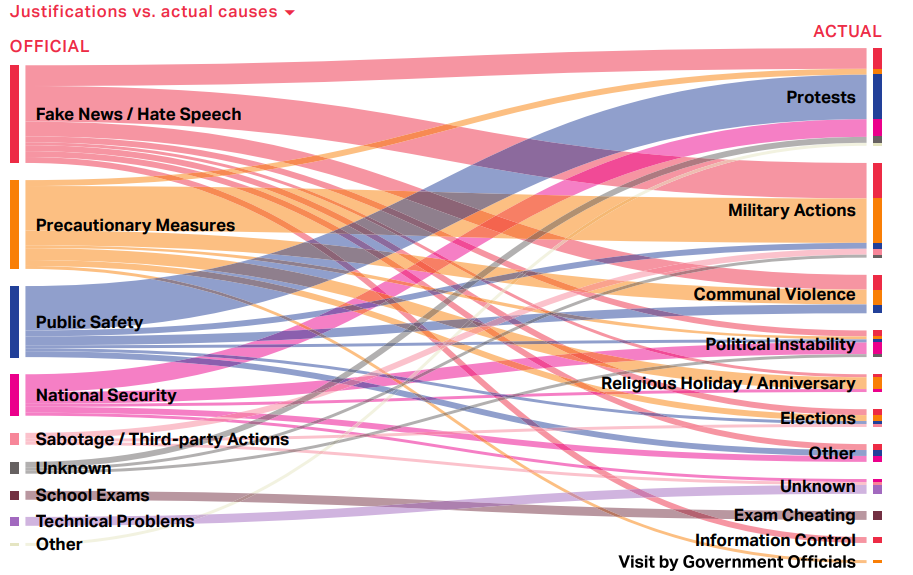 States’ attempts to create their own Internet networks

Even though states should ensure access to Internet for all users, without assuming exclusive regulatory and/or supervisory powers, many states in the world try to build their own Internet to be able to control the flow of information and users’ access. Since 2014, Russia has been building Runet—an autonomous Internet infrastructure that is independent of the outside Internet. In late 2019, Russian authorities passed the so-called Sovereign Internet Law. It enabled the government to block “malicious” traffic activity, or websites.[11] Similar exercises exist elsewhere in the world. North Korea has its Kwangmyong—a centrally administered network accessible only via an internal Linux distribution. Cuba has RedCubana—an alternative to open network that hosts Cuban versions of popular websites, such as Wikipedia, along with local apps. And Iran has its internal information network (aka Halal Internet) too. This government-controlled network hosts Iranian sites and can survey all its users, all the while allowing moderate access to the outside world.[12]

What can NGOs do to protect the access to Internet?

Though one cannot speak yet of a human right of access to Internet , the Internet remains an essential tool for exercising one’s freedom of expression. While access to Internet can be restricted for justified reasons, it is important to keep the principle of net neutrality to ensure access for all users irrespective of their whereabouts.

More details are available at https://www.accessnow.org/keepiton/#take-action.

This article is part of a series of non-academic publications produced by the Legal Resources Centre from Moldova (LRCM) as part of the Digital Rights Literacy Program supported by the International Center for Not-for-profit Law (ICNL). The opinions expressed in it are those of the LRCM and do not necessarily reflect the position of the ICNL.

[1] Johnson D.R., Post D., “The Rise of Law in Cyberspace,” Stanford Law Review, 1996, Vol. 48, p. 1367, available at http://papers.ssrn.com/sol3/papers.cfm?abstract_id=535: Initially named ARPAnet (Advanced Research Projects Agency Network from the USA). According to the paper, the Internet came into existence as a network for the promotion and development of advanced military technology and served as a means of communication between military hubs of the US army. After the extension of the ARPA network and the connection of other local networks created by some US university campuses to facilitate remote information exchange between universities, the Internet became a collective creation and even got a different name.

[2] Particularly the UDHR, the International Covenant on Civil and Political Rights (ICCPR), or the European Convention on Human Rights.

[6] United Nations, The Promotion, Protection and Enjoyment of Human Rights on the Internet, 2012.

[12] Danny Bradbury, (2021, 4 January) “Welcome to the splinternet—where freedom of expression is suppressed and repressed, and Big Brother is watching,” from: https://www.theregister.com/2021/01/04/welcome_to_the_splinternet/.