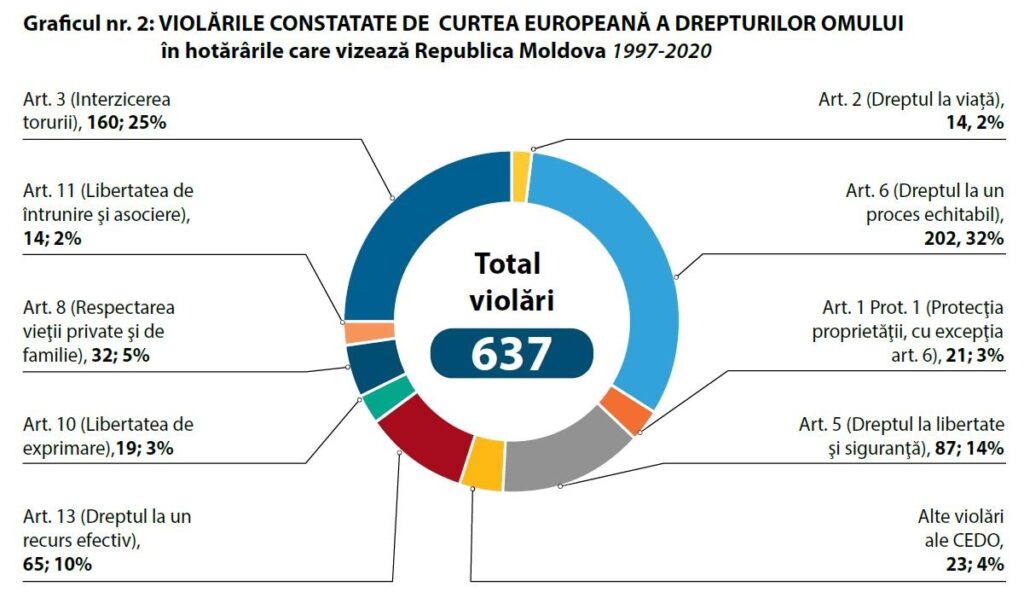 In 2019, the Republic of Moldova was in the 5th place among the countries against which the European Court of Human Rights (ECtHR)  issued the most judgements. Moreover, Moldovans complained to the ECtHR 3.4 times more often than the European average. This is the conclusion made by the experts of the Legal Resources Centre from Moldova (LRCM) based on the analysis of the ECtHR's activity report for the previous year.

In 2019, the ECtHR had delivered 54 judgements on Moldovan cases, ranking fifth out of the 47 member states of the Council of Europe. In this respect, Moldova is far ahead of Germany, Spain, or the Netherlands—the countries that have joined the European Convention on Human Rights (ECHR) long before Moldova and have a much larger population each than Moldova. In total, ECtHR had delivered 441 judgements on Moldovan cases. Most often Moldova was condemned by the ECtHR for the way judges or prosecutors applied the law.

16 out of 54 judgements delivered by ECtHR against Moldova (approximately 30%) concerned violations of human rights in the Transnistrian region. In 2 of the 16 judgements concerning the Russian Federation, the Republic of Moldova was also condemned. The 16 judgements refer to 34 cases filed at the ECtHR.

In the case of Filin v. Moldova and the Russian Federation, our country was condemned for failure to satisfy the positive obligation to prevent the applicant’s arrest by the representatives of the
“MRT” authorities, and in the case of Negruță  for favoring and contributing to the applicant's detention and transmission to the Transnistrian militia.

As of 31 December 2019, 1,056 Moldovan applications were still pending before the court. More than 95% of them have high chances of success. This is more than all the applications in the cases lost by Moldova in the 22 years since people got the right to sue Moldova to the ECtHR.

The analytical note was written in the framework of the project "Promoting rule of law in Moldova through civil society oversight", implemented by the LRCM with the support of the United States Agency for International Development (USAID).

From 1997 to 31December 2018, the ECtHR registered more than 14,200 applications against Moldova. At 31 December 2018, 1,204 of them were still waiting to be examined. As regards the number of pending applications, Moldova ranks 11th out of the 47 ECHR member countries.

Based on the judgements and decisions of the ECtHR issued by 31 December 2018, the Republic of Moldova was obliged to pay compensation of over EUR 16,600,000.

In order to increase the level of information of the society about the activity of ECtHR in Moldovan cases, the Legal Resources Centre from Moldova (LRCM) carried out analyzes for each year separately (period 2010-2018).

To facilitate the application of ECtHR standards at national level and to avoid similar deviations in future, the LRCM prepared a summary of all violations found by the ECtHR in the Republic of Moldova until 31 December 2017.

Similarly, LRCM analyzed the impact of the measures taken at national level to implement ECtHR rulings. LRCM has produced reports in this respect for the years 1997-2012 and 2013-2014.

In order for the society to enjoy all the benefits offered by the ECHR, its standards must be applied without reservation by the national authorities.

All ECtHR case law is available on the ECtHR website.