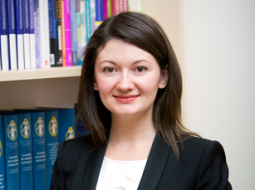 Sorina Macrinici is an attorney and a researcher working on improving the Moldovan justice sector and combating discrimination. Starting with January 2018, Sorina is the Director of Civil Society and Democracy Program at the Legal Resources Centre from Moldova. Previously she had the position of a legal officer, working on the justice sector reform, reform of investigating judges and combating discrimination in the labor, education and social assistance fields, promotion of an enabling environment for civil society organizations.

Sorina was awarded a Muskie scholarship and earned her LL.M. degree in International Human Rights from University of Notre Dame, Indiana, USA in May 2013. Between June and August 2013 she served an internship at the Maricopa County Superior Court in Phoenix, Arizona, where she was engaged with a wide range of court administration issues.

Sorina is fluent in Romanian (native), English and Russian.