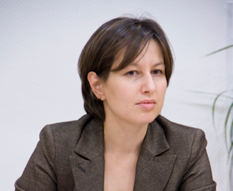 Mrs. Cepoi manages a major Internews project in Moldova "Media Enabling Democracy. Inclusion and Accountability in Moldova (MEDIA-M)". Previously Corina Cepoi managed a major Internews project in Kyrgyzstan. Between 2002 and 2013 she managed a major project of the Independent Journalism Center - the Chisinau School of Advanced Journalism, where she was leading the fundraising process within the organization, strategic planning and general coordination. Before that Mrs Cepoi worked as Director of the Independent Journalism Center from Moldova. Corina Cepoi is experienced in media communication trainings and assistance, media development and NGO management. Mrs Cepoi has a B.A. in English and MA in Journalism from the State University of Moldova as well as a Master’s degree from the Missouri School of Journalism in the USA. She also was a Chevening scholar at Oxford University.

Through the project, Internews will help media outlets from Republic of Moldova to improve the quality of their content, diversify news formats, strengthen their financial viability, and better engage their audiences, especially digitally