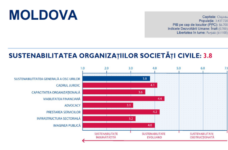 The financial viability of the civil society sector improved slightly due to growth in crowdfunding; funding through the 2 percent Law; and the development of social entrepreneurship. Sectoral infrastructure strengthened with increased sub-granting and the growth of intersectoral partnerships. At the same time, the public image of Civil Society Organisations (CSO) worsened slightly as government propaganda continued to be used to attack them. These are some of the conclusions of the CSO Sustainability Index for 2018, an annual analytical instrument that evaluates the strength and sustainability of the CSO sector in 71 countries from Asia, Eastern and Central Europe, Eurasia, Sub-Saharan Africa, Middle East and North Africa.

The results from 2018 for the Republic of Moldova show modest changes. The overall legal environment governing CSOs in Moldova did not change in 2018, with several positive (decrease of CSOs registration term from 30 to 15 days) and negative developments (transfer of the powers for registering CSOs from the Ministry of Justice to the Public Services Agency). The existing legal framework allows CSOs to earn money through statutory economic activity, social entrepreneurship, and the provision of social services to central and local public authorities. However, the mechanism for public administration bodies to contract social services is unclear and needs to be improved.

CSOs in Moldova are becoming more mature and active in monitoring policies and holding authorities accountable. However, there are some signs that the space for civil society to operate is narrowing.

CSO service provision did not change significantly in 2018. CSOs continue to provide services in a wide range of areas including legal assistance, social assistance to disadvantaged people, capacity building, and education.

The public image of CSOs worsened slightly in 2018. Government propaganda against CSOs continued to be a prominent feature of public speeches.

CSOs in the Transnistrian region generally operate in a The 2018 CSO Sustainability Index for Moldova very restricted environment. A new Law on Non-Governmental Organizations (NGOs) entered into force in May, which placed the work of CSOs under even more control, including by prohibiting CSOs from engaging in so-called political activity, which is defined broadly. At the same time, however, the self-proclaimed authorities in the Transnistrian region showed greater openness to working with civil society in certain areas, such as the provision of medical services, development of social programs, environmental protection, and access for people with disabilities.

Civil Society Organisation Sustainability Index is an analytical instrument that measure the progress of the civil society sector from the regions of the Eastern and Central Europe and Eurasia. In 2018, according to this index Moldova scored 3.8 points. This index represents a detailed analysis of seven dimensions based on seven points scale, where 1 indicates a high level of development and 7 a low level of development. The index is developed by the United States Agency for International Development (USAID) and implemented by FHI 360 and ICNL in partnership with local organisations from the analysed countries.