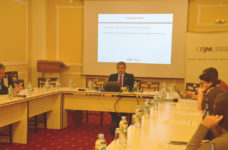 On 27September 2018, the Legal Resources Centre from Moldova (LRCM) organized a public event to discuss the analysis of the Strategy for the recovery of funds misappropriated from the banking system of the Republic of Moldova during 2007-2014, presented by the authorities in June this year. At the event were invited representatives of the Parliament, the Government, the National Anticorruption Center, the National Bank of Moldova, the judiciary, the development partners and the civil society. From the public authorities, only the Government and the National Integrity Authority honored the invitation.

Vladislav Gribincea, Executive director of the LRCM, said at the event that, after analyzing the Recovery Strategy, it is not clear who approved the document and the degree of commitment to its successful implementation. At the same time, almost 4 years after the end of the fraud, the exact sum misappropriated from the banking system is not known. The strategy also does not mention the fact that, after three years of investigation, no single leu of the stolen money has been returned yet.

The analysis finds that at least 20% of the amounts stolen from the banking system are not investigated in general. Although the stealing of at least 13.3 billion lei has been found, prosecutors are seeking recovery of only 10.7 billion, as 2.6 billion have been already recovered by selling the assets of the liquidated banks. Prosecutors report that 5.2 billion lei have been identified, although judges of the first instance have found that there is no evidence of 2.5 billion lei defrauded by Mr. Shor, that is about half of the amount with which prosecutors operate. Similarly, the authorities report receiving a sum of 2.7 billion lei from Ilan SHOR, although there is no court decision to collect this amount. At the same time, almost four years after bank fraud ended, the theft of about 38% (5.1 billion lei) of the stolen amount is still investigated by prosecutors.

The authors of the analysis believe that the Strategy is more of an advocacy tool, including because it was drafted and made public on the eve of the Moldovan leadership visit to Brussels. Also, the Strategy mostly concerns activities already covered by legislation, fact that cast doubt on the practical value of the Strategy in investigation of the fraud.

The full text of the Analysis of the strategy for the recovery of funds misappropriated from the banking system of the Republic of Moldova is available here.

The video recording of the presentation event of the Analysis of the strategy is available here.