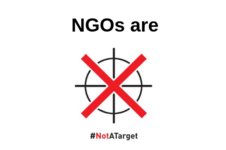 Civil Society Organizations (CSOs) developed Radiography of attacks against non-governmental organizations from the Republic of Moldova, which aimed at discrediting CSOs and deteriorating their environment for activity.

The document includes tendentious or often false statements and actions by politicians or their public interventions that portray the non-profit sector as organizations promoting the interests of foreign countries or serving the interests of political parties. The attacks address the independent CSOs, after they have expressed their dissenting position regarding several actions and initiatives of the government. Usually, the attacks are found in little known online media resources that publish false or biased materials or politically affiliated mass media. The attacks that took place in 2019 focused mainly on some events such as the parliamentary elections in February  2019,  the  judiciary  reform  announced  by  SANDU  Government  in  the  summer  of  2019  or  the selection  of  judges  to  the  Constitutional  Court.

The main purpose of this document is to draw attention to the orchestrated attacks on the CSOs and to determine public authorities, private institutions and individuals supporting those attacks to stop them and allow the CSOs to act freely. This document also aims to enable the CSOs to formulate a prompt response to attacks against them.

The phenomenon of attacks on the civil society is not an isolated issue characteristic for the Republic of Moldova, but rather a trend in the countries from the South Eastern region of Europe with a fragile level of democracy. The methods and tools by which this is done are becoming more and more sophisticated and widespread. One of the many negative outcomes of these actions is the constraint imposed on the CSOs and civic activists to self-censor or to ”scale back” on their activities. Based on the experience of other states in the region, stigmatization of the CSOs can be a precursor to some persecution actions by the state authorities.

The Romanian version of the document is available here.

The English version of the document is available here.

The Russian version of the document is available here.