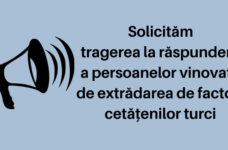 Several civil society organizations consider that the forced removal of Turkish citizens on 6 September 2018 was politically-driven and done in violation of national laws and international treaties on human rights. A month after this event, the authorities’ answers regarding the legality of the removal of Turkish citizens continue to raise many questions. In the absence of clear arguments confirming that there really existed a risk of a threat to national security, there is a strong presumption that the operation carried out by the authorities took place out of political interests and it actually was a camouflaged extradition at the request of the Turkish authorities.

The text of the appeal is available here