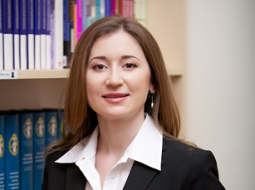 Nadejda HRIPTIEVSCHI is a founder and Justice and Human Rights Program Director at Legal Resources Centre from Moldova (LRCM). In this capacity she is engaged in research, advocacy, fundraising, planning and management of the Justice Program. At LRCM she works on projects that promote independence and accountability of judiciary, equality and non-discrimination and implementation of international human rights standards in Moldova. Her primary areas of expertise include judiciary, legal aid and non-discrimination.

Nadejda Hriptievschi is a member of European Commission against Racism and Intolerance (ECRI) since 16 September 2013. Nadejda is a member of the Bar Association of Moldova since June 2011. She serves as consultant on judiciary, criminal justice and human rights for different national and international organisations.

Between 2008 and 2012, Nadejda taught human rights (2010-2012) and criminal procedure (2008-2009) at the Law Faculty of the State University of Moldova. She also served as consultant on legal aid, being closely involved in the legal aid reform in Moldova since 2003. She has worked with the first Public Defender Office in Moldova from 2007 to 2011. She was also engaged in legal aid reforms in Bulgaria, Georgia, Lithuania, Mongolia and Ukraine and participated in the creation of the Legal Aid Reformers’ Network. Nadejda has worked as Junior Legal Officer for Open Society Justice Initiative, Budapest, Hungary from January 2003 to December 2006. She interned with the Constitutional and Legal Policy Institute, Budapest, on national criminal justice program from August 2001 to December 2002 and with the Registry of the European Court of Human Rights, Strasbourg, France from April to June 2002.

Nadejda received a Master of Laws in Comparative Constitutional Law with additional specialisation in Human Rights at the Central European University, Budapest, in July 2001 and a law degree at the State University of Moldova in June 2000.

Nadejda’s mother tongue is Romanian, she speaks fluently English and Russian, and has an intermediate knowledge of French.