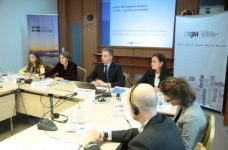 In 2016, the Republic of Moldova allocated EUR 8 per capita to the justice system and was the country with the smallest amount allocated to this field. In 2018, the amount increased to Eur 17 per capita, which was 3.5 times less than the average of the Council of Europe (CoE) member countries. However, the share of the budget allocated to justice in the state budget, in 2018, was very high, accounting for 1.5% of all expenditures, compared with the average of 0.9% in the CoE member countries.

These data result from the analysis “Justice of the Republic of Moldova in figures – a comparative perspective“, carried out by the Legal Resources Centre from Moldova (LRCM). The report presents a comparison of the justice in the Republic of Moldova with that of 10 countries from the former socialist camp, as well as the average of 45 CoE member countries. Based on the conclusions of the analysis, potential intervention needs at policy level in this area can be identified.

The analysis “Justice of the Republic of Moldova in figures – a comparative perspective” was elaborated by the LRCM within the project “Institutional Support for Organizational Development”, implemented with the support of the Swedish Embassy.

The video from the launching event is available here.