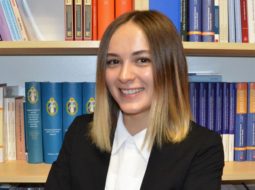 Cătălina Bîrsanu works as a Legal Officer at the Legal Resources Centre from Moldova since October 2019. Previously, she worked as an assistant at a technical assistance project funded by the European Union.

In 2018, Cătălina completed her bachelor degree at the Law Faculty of the Moldova State University, where during her studies she participated in several moot courts, such as Willem C. Vis International Commercial Arbitration Moot Court  and TLI International Mock Trial Competition. For two years she was a scholarship holder at Konrad Adenauer Stiftung, participating in simulations of the EU institutions’ decision-making process in Brussels, Tbilisi and Bucharest.

Cătălina speaks fluently Romanian (mother tongue) and English. She speaks Russian at the intermediate level, also French and Dutch at the beginner level.