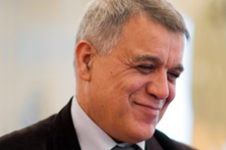 Mr. Victor URSU is currently the Deputy Director of the Publishing House ARC. Mr. Ursu has built his long professional carrier, for about 26 years, at the Soros Foundation-Moldova (SFM), leading the Foundation, as Executive Director, between 1996-2018, and initially acting as Program Director between 1992-1996. His areas of expertise are diverse, particularly public policy, civil society development, management, and micro-financing.

Mr. Ursu has also activated as a researcher at the Institute of Physics from the Moldovan Academy of Sciences. He has bachelor degree in theoretical physics at Chisinau Technical University and completed Postgraduate studies at Moscow Lebedev Institute of Physics.