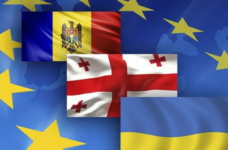 Profound changes have happened in Eastern Europe in the last decade that require establishing a new format for cooperation of Ukraine, Moldova, Georgia in  their efforts of political and economic rapprochement to the European Union (EU). This is the conclusion of the joint declaration of Civil Society Platforms of the three countries, adopted on 13 November 2019 in Kyiv, at the third Association Exchange Forum.

According to the declaration, the cooperation between the three countries from the Eastern Europe should be further institutionalized. It should exist in parallel to and without jeopardizing the existing Eastern Partnership multilateral structure. It will include regular consultations and joint actions on the governmental, parliamentary and civil society levels in order to meet the political and economic criteria for European integration.

The goal of this trilateral format of cooperation is to facilitate discussions, experience exchange, and comparative assessments of their progress in democracy, the rule of law and good governance.  Moreover, the three countries should facilitate trade and build a common market with free movement of goods, services, capital and persons. The three countries should conduct regular consultations on the issues of regional security and cooperate to raise resilience against hybrid threats.

The Civil Society Platforms of Moldova, Ukraine and Georgia call on:

Declaration was presented to the officials and expert community of the three associated countries as well as to the representatives of the EU institutions (European Commission, European External Affairs Service, European Parliament).

Declaration in English is available here.

Recent publications
COMMUNICATION in accordance with Rule 9.2 of the Rules for the supervision of the execution of judgments OZDIL AND OTHERS v. MOLDOVA
(Ro) Radiografia atacurilor asupra organizațiilor societății civile din Republica Moldova în 2019
Radiography of attacks against non-governmental organizations of the Republic of Moldova in 2019
See archive