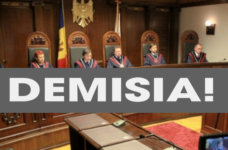 Between 7-9 June 2019, the Constitutional Court of the Republic of Moldova adopted a decision, three judgements and two opinions, thus creating an unprecedented constitutional crisis. Afterwards, on 15 June 2019, the Court revised all of its acts adopted between 7-9 June 2019. Initially, towards the end of the day on 7 June 2019, the Court issued a decision, providing without any reason, that the three-month term in which the Moldovan President can dissolve the Parliament, in case there is no possibility to form the Government or there is legislative blockage, is in fact 90 days. As a result, the Court has basically reduced the real time to allow the political parties from the Parliament to negotiate the formation of the Government. This decision was issued following an application lodged by the President Igor DODON on 22 May 2019.

On the second day, on Saturday, 8 June 2019, the Court adopted three judgments, concluding that the competence of a dissolved Parliament is different from the one of a Parliament with an expired mandate, therefore the dissolved Parliament cannot adopt any legislative act. Consequently, through another judgement issued on the same day, the Court declared as unconstitutional the act of the Parliament nominating Zinaida GRECEANII as Speaker and also declared unconstitutional ab initio all the acts voted by the newly-elected Parliament of 10th Legislature, that has been formed following the parliamentary elections from 24 February 2019. By its third decision, the Court declared as unconstitutional the President Igor DODON decree, on nominating Maia SANDU for the Prime Minister’s office, as well as the decree to form the new Government and the government led by Maia SANDU, voted the same day by the Parliament. The main arguments highlighted by the Court were based on the fact that the deadline to form the Government expired on 7 June 2019, calculating 90 days from the day of parliamentary elections’ validation, meaning 9 March 2019. The Court explained the application of the 90 days’ term by referring to an article from the Civil Code, which states that half a month equals 15 days. The Court also justified that the Parliament dissolution is a sanction applied for the inactivity of the political powers to form the Government or for creating a legislative blockage. For this reasons, any act adopted by the Parliament on 8 June 2019 could not be considered valid.

The Court issued these three judgments and two opinions on weekend days, on Saturday and Sunday, upon the applications submitted by the MPs from the democratic party, submitted just one day before, or the same day as the judgements / opinions were issued. The representatives of the Parliament and the President were not invited to attend the Court’s hearings, nor their opinions were presented. The Democratic Party members where the only ones attending these hearings.

On 15 June 2019, the Constitutional Court revised and annulled their acts adopted from 7 to 9 June, “considering the de facto situation in the Republic of Moldova, particularly the announced transfer of power to the Government of Prime Minister Maia SANDU and of the coalition formed in the Parliament of the Republic of Moldova.” The Court, also emphasized “that judgment was meant to be a source of social peace, rule of law, democracy, as well as a safeguard of a proper framework of human rights protection, by combating a political crisis of great magnitude”. On 20 June 2019, Mihai POALELUNGI resigned as a judge and the President of the Constitutional Court.

The summary of the main observations of the Venice Commission

In its opinion published on 24 June 2019, the Venice Commission concluded that when issuing the rulings and opinions on 7-9 June 2019, the Constitutional Court failed to respect its own procedures and the principle of equality of the parts. These procedures have been examined exclusively with the exclusive participation of the democratic party MPs, with an extraordinary speed, which did not give reasonable opportunity for the other parties to basically participate, without providing any justification for such a hurry. The Commission did not find any justification for the fact that the Constitutional Court ruled on the application of the President of the Republic of Moldova on the Government’s forming deadline only on 7 June 2019, although the application was lodged on 22 May 2019. The applications submitted by the Democratic party MPs on 8 and 9 June, were considered and examined as a matter of high priority by the Court, often on the same day. The Commission found that, in fact, the crisis and the instability increased as a result of the coordinated actions between the Democratic Party and the Constitutional Court from 7 June 2019, which were implemented with an extreme haste. The Commission stressed that any constitutional body must firstly respect their own procedures and the principle of equality of the parties to ensure its confidence.

The Venice Commission found that for the first time in its decision of 7 June, the Constitutional Court added a non-reasoned indication in brackets that the three months’ term equal 90 days, a method of interpretation that would have absurd implications on the duration of a year (one year = 360 days). The Commission noted that the Constitutional Court of the Republic of Moldova failed to explain why it did not refer to the more pertinent provisions in the Civil Code, according to which the three-month term would expire on 10 June 2019 because three months expired on 9 June, a day of Sunday, but according to the general provisions of the Civil Code (Article 388 paragraph 1), the term is prolonged until the end of the next working day.

The Venice Commission is the most prestigious and credible European body in constitutional matters, whose opinion should be strictly considered by the Republic of Moldova, especially in view of the still-evolving nature of our democracy.

In the absence of the resignation from the respective judges, we ask the Parliament to urgently establish a Commission composed from representatives of political parties, local and international notorious experts, in order to find a solution to dismiss the current judges, to investigate their actions through the existence or non-existence of a componence of an offense and the appointment of new constitutional judges in a transparent and merit-based manner.

The public appeal is available here