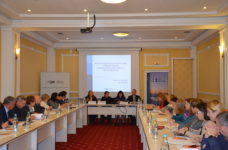 Although, at first glance, there is equality in the presence of women and men as actors in the justice system in the Republic of Moldova, women are not represented proportionally in management positions (president, vice president) in the courts, hitting a “glass ceiling”. This “glass ceiling” that leads to the implicit exclusion of women from management positions has been constructed and is based on prejudices and stereotypes regarding the role of women in the family and in society. These are the conclusions of the report “Analysis of the gender dimension in the justice sector in the Republic of Moldova” launched today by the Legal Resources Centre from Moldova (LRCM) in Chișinău.

Despite the increasing number of women entering the profession equally with men, women seem to have less chances of promotion when it comes to management positions. The biggest disparity, however, appears in terms of promotion to senior positions at the Supreme Court of Justice. In this case, even though an equal number of women and men applied during the analysed period for a senior position, men‘s chances to be promoted were three times higher. Even when a women judge is the unique candidate for promotion, her chances of success vary between 30 and 50%, depending on the type of court, while in the case of a man being the single candidate, the chances are between 50 and 75%.

There is a general perception that a woman judge has to give up an important part of her family life in order to pursue her profession, fact confirmed by all the interviewed judges. Women judges pay the price of professional success by managing exhausting multiple tasks. They result from both heavy workload and the demands of professional status, as well as from the internalization of some social expectations regarding the role of women in the family and in society.

The existence of gender imbalances regarding the employment or promotion in public positions is not a problem faced only by the Republic of Moldova. The same phenomenon has also been observed in other states, with the difference that their national authorities took temporary measures designed to ensure equal opportunities when these disparities had been found.

The report includes general action lines and recommendations addressed to the Parliament, the Ministry of Justice, the Superior Council of Magistracy, the National Institute of Justice, the presidents of the courts, as well as to the international donors and civil society interested in supporting the improvement of the internal management processes of the judicial system in the Republic of Moldova.

The following recommendations can be highlighted:

– Amendment of Law no. 154/2012 regarding the selection, evaluation of the performances and the career of the judges by explicitly providing that, in the case of promotions to a higher court and in the contests for a management position, when a man and woman obtain an equal score, to give priority to the woman judge, as a temporary special measure, as long as there is a massive gender imbalance as current statistical data show.

– Reduced allocation of files in the Integrated Case Management System for parents who return from childcare leave according to their part-time work programme.

– Providing regular courses with updated information for judges that come back to work after childcare leave.

– Giving priority to participation in international cooperation projects and initiatives that aim to transfer best practices in ensuring gender equality in the judiciary.

The report was drawn up by Romanița IORDACHE and Iustina IONESCU, international experts in the field of non-discrimination and gender equality with the support of the LRCM, within the project “Institutional Support for Organizational Development” implemented by LRCM and funded by Sweden.